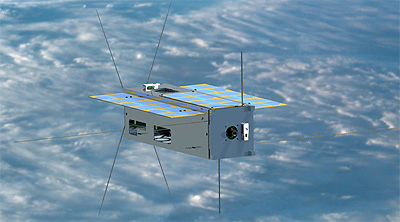 OGMS-SA (OutGassing Material Study by Spectroscopy Analysis), is a French 3U-CubeSat designed by Université Paris-Est Créteil (UPEC) participating in the QB50 project as an In-Orbit demonstrator, developed in order to test an experiment in space environment.

OGMS-SA is a 3U CubeSat with a mission to test the functioning of a CRDS (Cavity Ring Down Spectrometer) in space, a spectroscopic cavity containing an outgassing sample exposed to solar radiation.

This spectrometry technology allows us to detect traces of gas in an optical cavity build of two high reflective mirrors, by studying the output signal, called ring-down. By introducing a laser pulse into the cavity thanks to an optical switch, the optical length of the photons reaches hundreds of meters and is affected by the gas concentration into the cavity. The more gas is inside the cavity, the shorter the decreasing time, the ring-down, is.

Concerning OGMS-SA, the objective is to look at CO2 concentration variations into the cavity. This concentration will be influenced by the temperature inside the instrument, the day and night cycle, and the absorption/desorption phenomena due to a TiO2 sample placed into the cavity and exposed to UV solar radiation.

OGMS-SA was originally developed to be part of the QB50 project, but has dropped out of this framework.