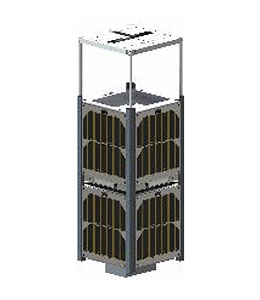 SamSat-QB50 is a 2U-CubeSat being developed by the Samara State Aerospace University (SSAU) flying a science unit with the FIPEX (Flux-Φ-Probe Experiment) sensor for QB50 and an aerodynamic stabilisation experiment.

The main design idea of the SamSat-QB50 is using atmospheric influence for obtaining needed orientation. For achieving this goal the satellite has a deployable aerodynamic stabilizer providing aerodynamic stability and hysteresis rods for oscillation energy dissipation.

The satellite will be launched with the bulk of the QB50 constellation to the ISS in 2017, from where they will be deployed.