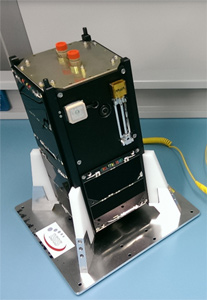 QB50P1 is one of two precursor satellites for the QB50 project, which demonstrates the possibility of launching a network of 50 CubeSats built by Universities Teams all over the world as a primary payload on a low-cost launch vehicle to perform first-class science in the largely unexplored lower thermosphere.

QB50P2 is a 2U-CubeSat built on a structure delivered by ISIS to test the Set 2 (FIPEX) payload.

The following payloads were integrated into the ISIS satellite platforms: