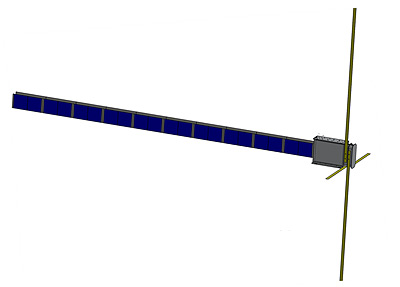 The VariSat-1 satellites are a technological demonstration mission consisting of two identical 6U CubeSats for VariSat LLV. The mission is to experiment and gain flight heritage with a satellite designed to support HF marine data communications. A pair of satellites will be launched, to test the inter satellite link aspect of the system that is envisioned,as well as test ship to satellite and satellite to surface stations.

The satellites were built by OmniTeq (formerly L2 Aerospace). The satellites are gravity gradient stabilized (via ½ wavelength tape antenna), as well as aerodynamic drag stabilized.

The satellites were orginally to be launched in early 2022 on the maiden flight of ABL's RS1 launch vehicle from Kodiak into an orbit at 350 km apogee and 200 km perigee, on an inclination fromthe equator of 87.3°. Transmission will begin 30 minutes after deploy from the launch vehicle, and cease upon reentry. Atmospheric friction will slow the satellite and reduce the altitude of the orbit, until de-orbiting occurs less than 2 months after launch.

In early 2022, the satellites were transferred to a rideshare launch on a Falcon-9 v1.2 (Block 5) (Transporter 5) with a third identical satellited added, but eventually only Varisat 1C was launched.

One of the satellites (VariSat 1C) carries the Celestis 21 or Ascension Flight small space burial capsule for Celestis.