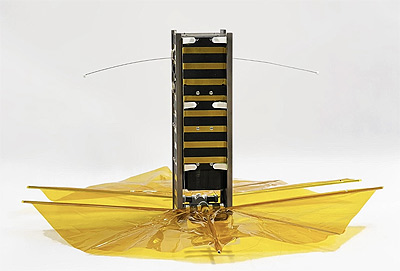 The spacecraft telemetry and downlinked photos can be easily received by any amateur or short wave listener with a minimum of cost and technical expertise. Hams can experiment with uplinking commands to the satellite to take a picture with one of the on-board cameras, immediately or with some time delay, and then to specify when (and thus where) that image will be downlinked.

The spacecraft itself is built using all commercially available amateur equipment at a cost and complexity compatible with club activities at a community level. The satellite can be built by a team with very limited prior experience in the satellite design or construction. The satellite will have an on-board camera and be able to receive a picture request from any capable ground station. This request can be to immediately take a picture and downlink it or to take a picture and transmit it at regular intervals or after a certain delay. The frequency of telemetry and image transmissions will be dependent on the power considerations of the satellite.

It also features an aerodrag device to be deployed on orbit, creating drag and slowly pushing the satellite out of its orbit. This device will allow the satellite to leave orbit within 25 years.

SBUDNIC was launched and deployed with the ION-SCV 004 orbital transportation vehicle designed, manufactured, and operated by D-Orbit to transport a batch of satellites into space, perform orbital manoeuvres, and deploy them with precision into their operational orbits. Guardian will be integrated inside IONs dispensers, alongside other spacecraft, and deployed according to Aistech Spaces requirements.