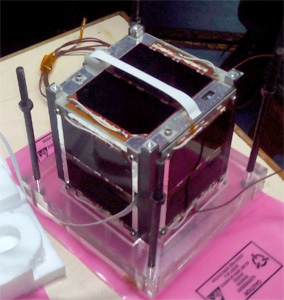 Swayam is an 1U CubeSat project conducted at the College of Engineering, Pune (COEP), aiming to develop a reliable bidirectional communications picosat platform.

The Swayam project was started in late 2008 as an educational project for students.

Swayam features a passive stabilization system which employs a pair of hysteresis rods and a magnet to stabilize the satellite thus eliminating the need to use bulky and power hungry magnetorquers. This Passive Attitude Control System of SWAYAM is the first of its kind in India. The satellite houses a payload capable of half duplex communication over the HAM frequency band which enables it to receive, store and transmit messages from one corner of the globe to the other. The team has also established a functional Ground Station and tracked many amateur radio satellites. The solar cells produce about 2 W of electrical power.