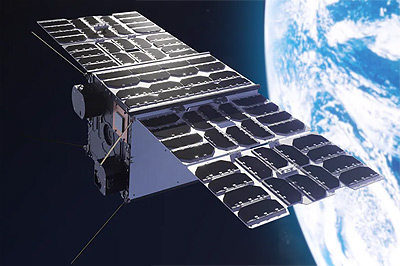 Omnispace is a planned mobile communications global hybrid network based on 3GPP standards.

Thales Alenia Space was contracted in 2020 to design and build an initial set of two satellites for operation in non-geostationary orbit (NGSO). These initial satellites will support 3GPP-defined (the 3rd Generation Partnership Project telecommunications specifications that unite standard development organizations) Narrow-Band IoT (Internet of Things) radio interface and will serve to advance the development and implementation of Omnispaces global hybrid network. This announcement marks a key milestone as Omnispace initiates the development of its new generation NGSO satellite constellation which will operate in the S-band.

The satellites' busses are to use platforms built by Nanoavionics with the S-band communications payload built by TAS in conjunction with Syrlinks.

The development of this initial set of satellites will begin immediately and they are scheduled for launch in 2022. Omnispace and Thales Alenia Space, along-side other industry stakeholders, will contribute to the development of the 3GPP NTN friendly standard for global implementation.