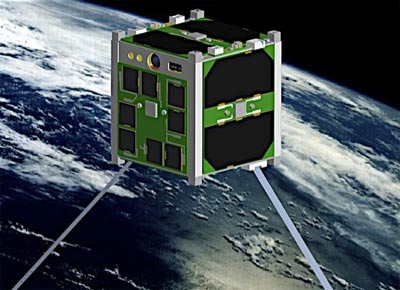 BeeSat (Berlin Experimental and Educational Satellite) is a pico satellite project of the Technical University of Berlin. The main objective of BeeSat 1 is the on orbit verification of newly developed micro reaction wheels for pico satellite applications.

BeeSat 1 or Tubsat 8 demonstrated the use of coin sized micro reaction wheels for attitude control of pico satellites in orbit as one of the key elements on which TU Berlin is currently working.

BeeSat-2 or Tubsat 9 was developed based on the CubeSat design specification by the employees of the department with the active participation of students. Important components of the satellite bus were already designed during the previous mission BeeSat-1 and provide the proven technical basis. The research objectives of the project consist primarily in the implementation of an innovative attitude control system for picosatellites and its technical evaluation under space conditions.

The primary goal of the BeeSat-3 or Tubsat 10 mission is the practical training of students based on a real satellite mission. The secondary objective is the one-year operation of a CubeSats which was built and tested within two years by students to evaluate the S-band transmitter HISPICO, the Earth observation camera as an exemplary payload and other technologies. The BeeSat-3 satellite was successfully deployed in orbit, but no signals were received.

BeeSat-4 or Tubsat 11 is based on BeeSat-2 and features an advanced GPS receiver. It was launched on 22 June 2016 inside the BIROS satellite and was deployed on 9 September 2016.