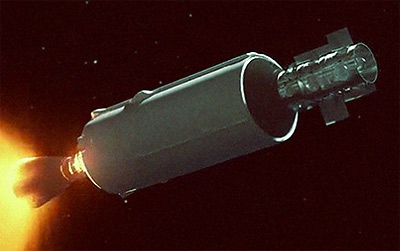 The OMD 1 (Outpost Mars Demo 1) is an experiment with the overall goal, to demonstrate metal cutting in space and to explore the feasibility of reusing abandoned space vehicles.

The experiment will be launched on the second stage of a SpaceX Falcon 9 launch vehicle on a dedicated sun-sync rideshare mission. The experiment remains attached to the second stage throughout the mission and during de-orbit. Stage 2 will be inserted into a circular orbit at about 545 km, 97.5 degrees inclination. Transmission and experiment initiation will be enabled by the Stage 2 on board computer after deployment of satellite payloads from Stage 2. This is estimated to be about 45 minutes after second stage engine cutoff. After completion of the mission, Stage 2 will be deorbited.

The payload system is a cutting experiment. A video camera will record a high speed cutting wheel cutting a coupon of CRES 316 stainless steel. The experiment will demonstrate cutting characteristics in zero g and vacuum.

Nanoracks designed a self-contained hosted payload platform to demonstrate on-orbit, debris-free, robotic metal cutting. The partner in this demonstration, Maxar Technologies, developed a new robotic arm with a friction milling end-effector. Friction milling uses a cutting tool operating at high rotations per minute to melt the metal in such a way that a cut is made, and no debris is generated. Maxars robotic cutter is equipped with thermal sensors and cameras, and once in space, Nanoracks and Maxar will have up to one hour to complete the cutting of three metal pieces, made of corrosion resistant steel (the same material that is used on the outer shell of ULAs Vulcan Centaur) without creating any debris in the process. The demonstration itself will occur about 9 minutes into flight and will be finished approximately 10 minutes later. The rest of the time the team will downlink the photos and video to the ground stations until the vehicle and hosted payloads de-orbit over the Pacific.