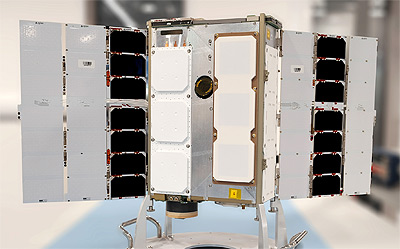 Lemur-2 is a constellation of low-Earth orbiting satellites built by Spire. These satellites carry payloads for meteorology and ship and aircraft traffic tracking.

Some Lemur-2 satellites are built on 6U CubeSat busses to allow for additional hosted payloads to be accomodated.

OroraTech 1 is a prototype satellite by Orora Technologies to detect wild fires. It is the precursor mission to a larger constellation of wild fire detection satellites.

The OroraTech-1 satellite is based on an enlarged 6U CubeSat version of Spire's Lemur-2 cubesat and features customized experiments additionally to the standard Lemur payload.

It carries OroraTechs unique and proprietary thermal-infrared camera and data processing unit designed to detect fires and transmit the data using Spires satellite and ground network. The technology will help identify and monitor the areas at risk of wildfires and enable early detection of wildfire hotspots.