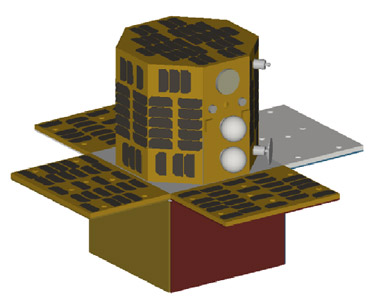 Aerospace Enterprise, a student organization at Michigan Technological University, designed and build the Oculus-ASR nanosatellite to improve to exercise and validate techniques for determining an orbiting object's pose using unresolved ground imagery. The nanosatellite has been optically characterized in an AFRL ground facility to determine reflective signatures that can be expected on orbit.

Oculus-ASR is a 70 kg satellite with a volume envelope of 50 cm by 50 cm by 80 cm. It consists of two modules that are permanently attached. An octagonal module, referred to as the Oculus module, sits atop a square module, known as the ASR module.

Each of the four sides on the ASR module has a deployable panel. Three of these panels are covered in solar cells. The fourth is covered in Duraflect material. Duraflect is a highly reflective, diffuse white coating used as an optical standard for characterization and calibration measurements. Under and on the back of each deployable panel are specific materials requested by telescope operators for their distinct spectral characteristics. These materials are red, blue, yellow, and clear anodized aluminum. Each panel is deployed separately through the actuation of Frangibolt actuators. Spring-loaded hinges then lift the panel until it locks in place 90° from its undeployed position. These deployable panels allow the spectral signature of Oculus-ASR to be changed multiple times over the course of the mission by altering the vehicles shape and exposed materials. Two releasable objects are mounted to the Oculus module. These objects are approximately 10 cm in diameter and will be used to provide ground observers an opportunity to view small, closely spaced objects. The releasable objects are coated in the same Duraflect material used on the deployable panel, and can be released individually using the same style of Frangibolt actuator used for the deployable panels. These objects then drift from the vehicle due to the force exerted from the actuator.

The Oculus-ASR will perform coordinated maneuvers during overflights of the Air Force Maui Optical Site (AMOS), which is an array of mountain-top telescopes used to inspect orbiting objects. AMOS investigators will attempt to determine the orientation and shape of the vehicle and will compare these measurements with the actual "truth" data that is downloaded from the satellite. The vehicle has the capability to change its shape by deploying panels to exercise the AMOS algorithms and see if ground observers can detect the shape changes. The Oculus-ASR also carries two sensitive imaging cameras that were donated by SAIC and Raytheon Missile Systems. These cameras will be used to gather space-to-space images of other orbiting objects that can then be compared with the ground-to-space images obtained by AMOS.

Oculus-ASR was selected as the winner of the sixth University Nanosat mission for launch in 2013.