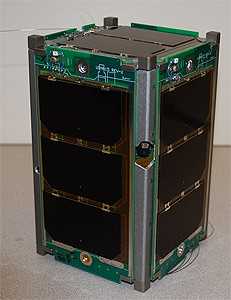 PSat 2 (ParkinsonSAT) is a student satellite project which is a two way communications transponder for relaying remote telemetry, sensor and user data from remote environmental experiments or other data sources back to experimenters via a global network of internet linked volunteer ground stations. The data transponder also includes all telemetry, command and control for a complete cubesat.

The PSat-2 is a 1.5U CubeSat. The unique features of PSAT-2 are the APRS transponder and the PSK31 transponder, both of which flew on PSAT-1 and the new APRStt (TouchTone)/Voice transponder, for which a prototype flies on the eXCITe (QIKCOM-2) satellite, which lets everyone do APRS using any radio with DTMF keypad, not just those with APRS radios.