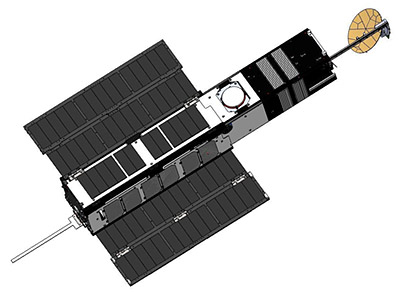 PolarCube is a 3U CubeSat based on the ALL-STAR platform and featuring an Earth-sensing passive microwave instrument with suborbital aircraft flight heritage that is currently being miniaturized for an orbital opportunity to provide atmospheric temperature profile measurements and sea ice/ ice-free ocean detection and mapping. This instrument, already prototyped, will be the first passive microwave sensor flown on a small satellite.

PolarCube is a Collaboration of three University of Colorado at Boulder groups:

The mission has a primary research goal of demonstrating atmospheric sounding and sea ice/ice-free ocean detection and mapping over the Polar Regions. A small digital camera system, integrated on the same ALL-STAR platform, will provide important ancillary data useful for validating spacecraft pointing and confirming detection of clouds and surface sea ice state. The secondary focus is an educational goal to integrate and fly a passive radiometer while working closely with science and engineering experts.

In addition to collecting important science data it will provide a template for future development of small satellite-borne passive microwave atmospheric sensors for collecting data on temperature, moisture, precipitation, cloud water and ice, and cryospheric surface features such as snow cover and sea ice concentration. The PolarCube team at the University of Colorado at Boulder is comprised of experts in radiometer design and testing, snow and ice data analysis, and a student team with CubeSat build experience for a 1U and 3U CubeSats. These experts will guide a new student team as they gain invaluable experience understanding real science objectives and building a flight instrument.

The PolarCube project will integrate the radiometer and the ALL-STAR bus (first flown on the ALL-STAR/THEIA satellite) and provide associated pre-launch testing and algorithm development. The first ALL-STAR bus has passed several reviews and a microgravity test flight. It will enter environmental testing in the early 2012. A space-qualified, compact version of the payload - the Miniaturized Microwave Radiometer (MiniRad) - is currently being designed and fabricated as a senior capstone design project by a team of CU engineering undergraduates. MiniRad is a passive microwave spectrometer with nine channels centered around the 118.7503 GHz oxygen emission line. Although well studied during many aircraft experiments dating back three decades, a spectrometer operating over this band has never before been flown in space.

The project involves a highly interdisciplinary team of graduate and undergraduate students with responsibility for the development, test, integration and delivery of the complete satellite. The use of COSGCs ALL-STAR bus for this mission will prove the adaptability of its 3U bus for a sensor not specifically considered during the design phase. Students will lead construction though on-orbit operations and provide the data to NSIDC for distribution and analysis.

It will be launched on the ELaNa-20 mission on a dedicated LauncherOne.