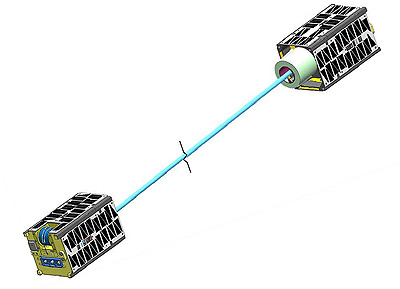 TEPCE (Tether Electrodynamics Propulsion CubeSat Experiment) is a 3U CubeSat that splits into two 1.5U CubeSats joined by a 1 km tether to test electrodynamic tether propulsion.

TEPCE consists of two nearly identical endmasses with a stacer spring between them, which separate the endmass and start deployment of a 1 km long braided-tape conducting tether. TEPCE will use a passive braking to reduce speed and hence recoil at the end of electrodynamic current in either direction. The main purpose of this mission is to raise or lower the orbit by several kilometers per day, to change libration state, to change orbit plane, and to actively maneuver.

It is a mission of the Naval Research Lab (NRL) and is launched via the Space Test Program (STP) and NASA's ELaNa initiative.

Both parts were tracked as one object. A large change in its decay rate on 17 November suggests the tether was deployed on that date, leading to its rapid reentry, which occured on 1 February 2020.