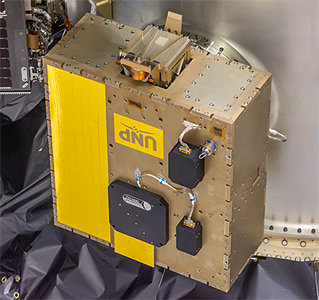 The Prox 1 mission was designed to demonstrate automated trajectory control in low-Earth orbit relative to a deployed cubesat, but was later downscoped to just deploy LightSail 2 and provide an optical.

The spacecraft has been designed, fabricated and tested by a team of Georgia Tech undergraduate and graduate students who will also be resposible for missions operations. The Prox-1 spacecraft is equipped with thermal and visible imagers provided by Arizona State University. Prox-1 will deploy a smaller spacecraft called LightSail 2, a 3U CubeSat solar sail demonstration mission developed by The Planetary Society in partnership with Stellar Exploration, Inc. and Cal Poly.

Prox-1 was to fly in close proximity to the LightSail spacecraft, demonstrating automated trajectory control based upon relative orbit determination using passive imaging. Prox-1 was also to acquire images of the LightSail solar sail deployment event, and was to provide first-time flight validation of advanced sun sensor technology, a small satellite propulsion system, and a lightweight thermal imager.

Prox-1 was selected as the winner of the seventh University Nanosat mission for launch in 2015. It will be launched on the STP-2 mission on a Falcon-Heavy (Block 5) rocket.

Later during development in 2017, Prox 1 was significantly down-scoped due to issues with the computer code, dropping the proximity operation mission. Although retaining the structure and the PPod to deploy LightSail 2, the satellite does no longer feature the sensor and propulsion elements and solar cells, reducing it to act as an optical target for attitude and orbit determination research of space objects.