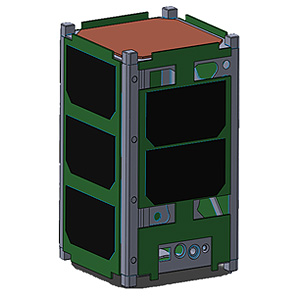 BRICSat 2 (Ballistically Reinforced Communication Satellite) is a low cost 1.5U CubeSat built by the US Naval Academy Satellite Lab in collaboration with George Washington University, that will demonstrate on-orbit operation of a Micro-Cathode Arc Thruster (µCAT) electric propulsion system and carries an Amateur communication payload as a follow on to BRICSat-P (BRICSat 1).

Four µCAT offset thrusters can both change the attitude of BRICSAT-2 but also do some orbit maneuvering.

BRICSat-2 has a Amateur communication payload on boards. An APRS constellation transponder with a telemetry downlink on 437.975 MHz and with packet up- and downlinks on 145.825 MHz 1k2 and 9k6 AX25.