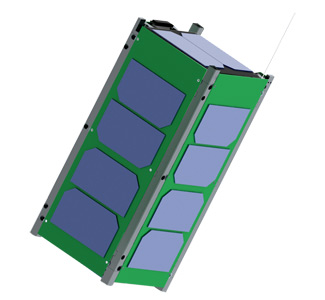 CP 9 or LEO (Launch Environment Observer) is one component of the joint CP-9/StangSat experiment, which is a collaboration between PolySat at Cal Poly and the Merritt Island High School, and is sponsored by NASA Launch Services Program (LSP).

PolySat is developing a 2U CubeSat, CP9 (LEO), and Merritt Island high school is developing StangSat, a 1U CubeSat. The Cal Poly Picosatellite Project (PolySat) was founded in 1999 and involves a multidisciplinary team of undergraduate and graduate engineering students working to design, construct, test, launch, and operate a CubeSat.

The CP9-StangSat mission will measure and record in-situ telemetry data from within the P-POD during launch. Specifically, the CP9 and StangSat CubeSats will record thermal data with a k-type thermocouple and dynamic data using two sets of accelerometers measuring ranges of ±10 g and ±100 g.

In addition to collecting the telemetry data during launch, the CP9-StangSat mission will demonstrate new technologies within the P-POD platform, including power-on capability and more notably, wireless communication. StangSat will stream its telemetry data in real-time via WiFi to CP9 during launch, violating the existing CubeSat specification prohibiting RF within the P-POD. Demonstrating wireless communication within the P-POD can benefit future missions that do not wish to develop satellite-to-ground radio links. These type of missions can utilize another CubeSat to downlink their data and possibly avoid the necessity of developing a complicated radio.

It was launched on the ELaNa-15 mission.