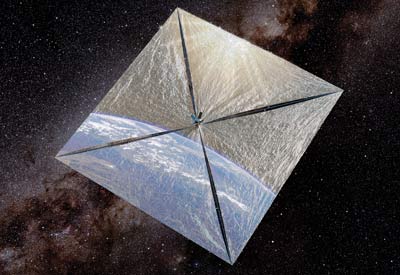 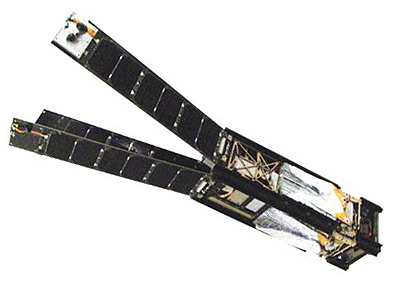 LightSail (before deployment) [The Planetary Society]

LightSail, developed by The Planetary Society, will demonstrate that sunlight alone can propel a spacecraft in Earth orbit. It is a follow up mission to the failed Cosmos 1 project.

Taking advantage of the technological advances in micro- and nano-spacecraft over the past five years, The Planetary Society will build LightSail based on a 3 Unit Cubesat spacecraft. One unit will form the central electronics and control module, and two additional units will house the solar sail module. Cameras, additional sensors, and a control system will be added to the basic Cubesat electronics bus.

LightSail will have four triangular sails, arranged in a diamond shape resembling a giant kite. Constructed of 32 square meters of mylar, LightSail will be placed in an orbit over 800 kilometers above Earth, high enough to escape the drag of Earths uppermost atmosphere. At that altitude the spacecraft will be subject only to the force of gravity keeping it in orbit and the pressure of sunlight on its sails increasing the orbital energy. The mission will give a good, clean trial of sunlight as a means of propulsion.

LightSail 1 was launched in 2015 on the ELaNa-11 mission in a low earth orbit to verify the deployment of the sail, although in this orbit the atmospherical drag prevents solar sailing. LightSail 1 suffered a software problem after two days, causing the computer to freeze. As it did not respond to reboot commands, it was hoped, that a random radiation induced reboot might solve the problem. The reboot happened after a few days and communications was re-established. The sail was finally deployed on 7 June 2015. Due to the increased drag, the satellite reentered the atmosphere on 15 June 2015 after 25 days on orbit.

LightSail 2 was deployed from the Prox 1 microsatellite in a higher orbit to perform its own solar sailing mission. It deployed its sail on 23 July 2019. On 31 August, the Planetary Society declared the mission a success, as it had raised the apogee of its orbit by nearly two kilometers in four days after deployment, while lowering the apogee.

The Planetary Society announced not to plan a follow-on mission, but to share the technology with others.