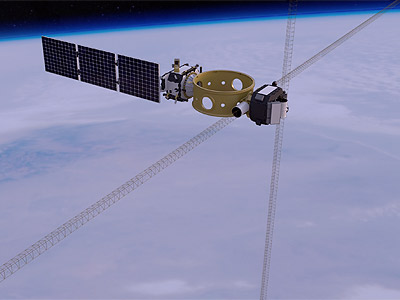 Unlike the traditional ESPA approach, in DSX the experiments and host spacecraft stay attached and do not deploy. After the primary satellite in the EELV is deployed, the DSX ESPA separates from the EELV 2nd stage booster to become a free-flyer spacecraft. To address the space access aspect of the rapid-response problem, DSX will utilize an EELV Secondary Payload Adapter (ESPA) capability as a platform for highly-capable small and medium free-flying satellites (or ESPASats) that have plentiful and relatively inexpensive launch opportunities on EELV as secondary payloads.

Scientific research will be conducted with DSX in the areas of:

Following deployable structures will be tested:

MicroSat Systems, Inc. was awarded a $9,385,245 cost-plus award-fee contract to build the Deployable Structures Experiment (DSX) Host Spacecraft Bus (HSB) for the Air Force Research Laboratory, Kirtland Air Force Base, N.M. MSI's role is the design, fabrication, environmental testing, and delivery of two Host Spacecraft Buses with the capability to provide standard bus functions in support of the payloads and experiments. The Host Spacecraft Bus is a derivative of the MSI Road Runner Bus as used on TacSat 2 Spacecraft.

The purpose of the HSB is to provide primary spacecraft host functions for DSX, including power generation and storage, power management and distribution (PMAD), attitude determination and control, self-thermal management, payload thermal control, communications, command and data handling (C&DH). The HSB will also provide interfaces to the DSX Experiment Computer System (ECS), and structural support and mechanisms required to support these host functions.

While DSX is baselined for a piggy-back-launch on an EELV, it can also easily modified for a dedicated launch on a Minotaur-4 or Falcon-9 launch vehicle by removing the ESPA structure and stacking both HSB components directly on each other.

DSX was launched aboard a SpaceX Falcon-Heavy (Block 5) rocket in 2019 on the STP-2 demonstration mission as one of the two main payloads.

The DSX mission ended on 31 May 2021, when the satellite was passivated in orbit.