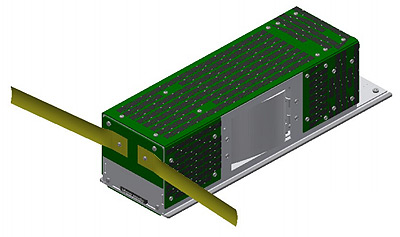 Capitol Technology University CACTUS-1 is a technological demonstration of a cost-saving communications and commanding innovation that will enable scientific data gathering and contribute risk parameterization and mitigation services to aid both academic and industry teams in future missions.

Project TRAPSat will be the main science component of the CubeSat, trapping micrometeorites in an aerogel medium to better map the existence of micrometeorites orbiting the Earth.

Project HERMES will be the main communications component of the satellite flying under a different name  OSHComm. The Onboard Spacecraft Hotspot Communications (OSHComm) Subsystem will communicate with the ground through Satellite internet via the Iridium Constellation. This means unlike conventional CubeSats, the communications coverage with the satellite will be Global, 24/7, and accessible where ever there is internet. The CACTUS 1 team will be able to command and receive data from their satellite from any computer, laptop, or smartphone at any time.

The structure for CACTUS 1 was developed at Capitol Technology University. Unlike most 3U CubeSats, it uses tab mounting instead of rails for deployment.

It was selected in 2015 by NASA's CubeSat Launch Initiative (CSLI) to be launched as part of the ELaNa program. It will be launched on the ELaNa-20 mission on a dedicated LauncherOne.