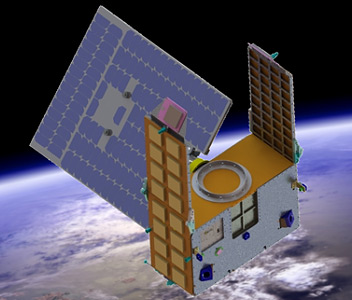 PlanetiQ's GNOMES (GNSS Navigation and Occultation Measurement Satellites) is a planned constellation of small satellites to provide radio occultation data for weather forecasting, climate research, and space weather monitoring, with the first satellites to be launched in late 2016.

Blue Canyon Technologies of Boulder, Colorado, will build a set of 12 satellites, each carrying a Global Positioning System radio occultation payload. The satellites will feauture an on-board propulsion, each weighing less than 20 kilograms. The satellites will operate in orbits of 750 to 800 kilometers at an inclination of 72°.

PlanetiQ has been separately developing its GPS radio occultation sensor, called Pyxis, that measures signals from all four major GNSS constellations (GPS, GLONASS, Galileo and Beidou) as those signals pass through the atmosphere. Those measurements provide soundings of the atmosphere that can be fed into weather forecasting models.

Originally designed to weigh over 120 kilograms, the satellites were later scaled down to less than 20 kg 6U CubeSats. One tradeoff that PlanetiQ did have to make by moving to the smaller Cubesat type satellite is the elimination of a real-time data relay system in at least the first six satellites. Instead, the satellites will use a network of ground stations, which should delay the receipt of data by no more than 90 minutes.

Later in 2018, PlanetiQ increased the size of the satellites again to a ~30 kg microsatellite, as the 6U CubeSat proved to be too small to provide the desired quality of data. Also the constellation size was increased to 20 satellites. Future instruments planned for PlanetiQ satellites 13-18 include the Active Temperature, Ozone and Moisture Microwave Spectrometer (ATOMMS) and a next-generation microwave radiometer. ATOMMS, currently funded by the National Science Foundation, will use centimeter and millimeter wavelengths to simultaneously profile temperature, pressure, and water vapor versus altitude. ATOMMS will measure water vapor far more accurately than current sensors, yielding 1% or better accuracy from the lower troposphere into the mesosphere.

PlanetiQ plans to launch its first two satellites in the fall of 2016, four more in the summer of 2017 with the remaining six to launch by the end of 2017. Those satellites will be launched as secondary payloads, which the company is in the process of negotiating.

After this, the updated GNOMES satellites will be launched in pairs.