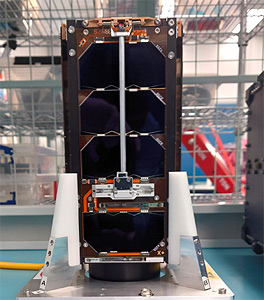 Ghalib is a demonstrator turn-key mission for space-based tracking of falcon migration.

From feasibility study to designing and building a nanosatellite that is capable of tracking migrating falcons, ISISPACE built the 2U CubeSat platform and integrated the payload. The payload consists of a radio receiver, manufactured by Marshall Intech, and a camera to take pictures of the Earth on demand.

While this mission entails a single satellite for demonstration purposes, the ultimate goal is to launch a constellation of multiple nanosatellites for continuous tracking. The satellite system is capable of global tracking of large birds and wildlife with small transmitters.