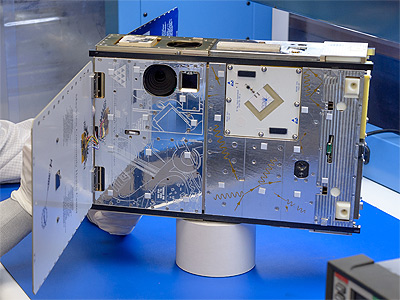 NASAs Payload Accelerator for CubeSat Endeavors, or PACE, initiative is finding ways to speed up the process of getting small spacecraft technologies ready for prime time. PACEs goal is to mature technology payloads, from early-stage proof-of-concept models to flight qualification for an operational space mission, all while shortening technology testing timelines.

ADPs platform is a modular, low-cost avionics architecture paired with commercial off-the-shelf CubeSat components. PACEs second orbital flight mission, PACE-1, will perform a set of experiments to demonstrate the ADP technology, kicking off a series of flights to follow. The PACE team will develop, test, and operate the projects, each utilizing the ADP platform. Payloads for PACE missions come from within NASA or other US Government agencies, small businesses and other industry, academic institutions, and research laboratories. In addition to demonstrating the ADP architecture, PACE-1 also supports four technology payloads.

ADPs avionics core is currently built into a six-unit CubeSat form but can adapt to other form factors. The core provides the supporting systems to operate the spacecraft and the payloads it carries. The satellite is roughly the size of two large loaves of bread, stacked side-by-side. The avionics core occupies a third of the spacecrafts interior, leaving plenty of room to integrate various payloads.

ADP first flight will demonstrate a switching capability that allows multiple GPS and radio communications systems to take turns receiving signals. These systems use a single antenna attached to the spacecraft rather than using multiple dedicated antennas, as its typically done. For the PACE-1 spacecraft, this means that the amount of surface space needed for antennas is cut in half, freeing up space for surface-mounted payloads such as an attached radio frequency tag and optical experiments hardware.

Components of ADPs supporting avionics can be configured for use in earlier-stage tests, such as benchtop lab tests or suborbital flights. This flexible approach simplifies the logistics of testing payloads in different test environments, helping researchers speed their technologies through the maturation process.