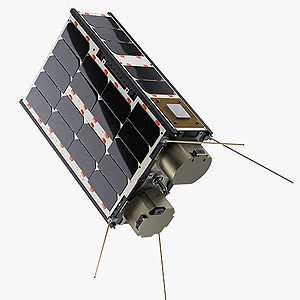 M6P is a 6U-CubeSat project being developed by the Lithuanian NanoAvionics as a pathfinder mission for their M6P cubesat platform. It is a ride-share mission for two customers.

During the mission NanoAvionics will be testing their 6U (called M6P  Multipurpose 6U Platform) platform based on a modular and highly integral design which extends payload volume. The M6P will be 4th Lithuanian built Cubesat and a lot of knowledge and experience will be used gathered from still active LituanicaSat-2 mission.

The M6P will be equipped with active stabilization: integrated magnetorquers and momentum wheels. There will also going to be installed in house build EPS, Flight computer with integrated ADCS, and COMMs. Satellite will also include 2 UHF transceivers (for redundancy purposes) that will work with deployable dual dipole turnstile type antennas.

To ensure the practical reliability of the platform, radiation-resistant components and design implementations have been incorporated to support critical systems such as the Flight Computer, Payload Controller, Electric Power System and Communication System. The platform is optimized to have a nominal 5 years operational lifetime in a Low-Earth Orbit (LEO) environment.

The satellite was released into a lower than planned orbit due to a delayed deployment, reducing the orbital life time slightly.

A second satellite, R 2 or M6P 2 will be launched in 2020. It is also a hosted payload rideshare mission. The payloads are one of OMSs miniaturized passive microwave sensors, a Hall-Effect propulsion system demonstrator from Exotrail (?) and another Lacuna Space payload. The software developed by Exotrail (ExoOPS) for mission design and operation will serve as a key propulsion ground segment element for the mission.