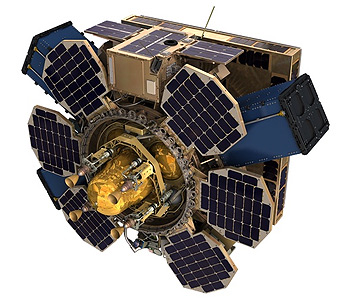 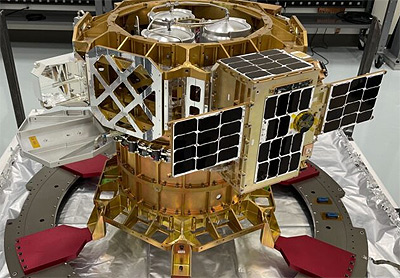 Sherpa-LTC builds upon Sherpa-AC with the addition of a nontoxic storable propulsion system. Sherpa-LTC features a highthrust, bi-propellant, green propulsion subsystem integrated seamlessly within the available space of the original free flyer. By including its own high-thrust propulsion, Sherpa-LTC provides a low cost, rapid orbital transfer for many sizes of small spacecraft. Designed with launch vehicle flexibility as a requirement, SherpaLTC is compatible with most launch vehicles with which Spaceflight currently works.

The Sherpa chemical propulsion system utilizes the Polaris propulsion system from Benchmark Space Systems with green propellants. High Test Peroxide (HTP) is the oxidizer and Isopropyl Alcohol (IPA) is the fuel. These propellants are pressure-fed, using gaseous nitrogen as the pressurant. Polaris is a dual-mode bipropellant system with four independently controlled thrusters. HTP can be used as a monopropellant in a low-thrust mode or combined with IPA in high-thrust mode. Each thruster can provide up to 22 N of thrust individually; when operated together, all four thrusters provide up to 88 N of thrust. With the ability to command the thrusters independently, Sherpa can steer without the need of a gimbal.

Sherpa-LTC 1 leaked propellant in December 2021 after integrating with SpaceX equipment at Cape Canaveral, which led to SpaceX dropping the OTV from a Falcon-9 v1.2 (Block 5) rideshare mission in January, forcing Spaceflight to find alternative launches for 10 cubesats set to hitch a ride on it.

Sherpa-LTC 2 hosts Boeings Varuna-TDM (Varuna Technology Demonstration Mission) communications payload as a dedicated mission. Varuna-TDM is a commercial program by Boeing, intended to demonstrate technologies and perform in-orbit performance testing for a V-band communications system for Boeing's planned constellation of 147 non-geostationary (NGSO) broadband satellites. The in-orbit demonstration will allow for verification of assumptions regarding the propagation characteristics of V-band spectrum, will provide an opportunity for manufacturers of terminal equipment and other hardware compatible with Boeings V-band Non-Geostationary Fixed Satellite Service system to demonstrate and confirm the capabilities of their equipment designs, and allow prospective users of Boeings broadband communications services (including both commercial and federal government users) an opportunity to evaluate the performance of V-band communications links and ascertain their attributes and acceptability for specific applications. The Varuna spacecraft consists of Sherpa-LTC 2 and spacecraft functions housed in two separate modules built by Astro Digital and which are hosted on the Sherpa ring. These modules are the command & control system (CCS) and a V-band payload module. Varuna-TDM will be launched as a ride share on a SpaceX Starlink mission, where it will be deployed in a 280 km orbit. It will then raise orbit via two Hohmann burns to its operational orbit (1056 km circular orbit at 54° inclination) where it will perform V-band operations for a period of up to two years. At conclusion of mission, it will perform deorbit burn to reduce orbit perigee to 300 km to shorten the time until reentry.