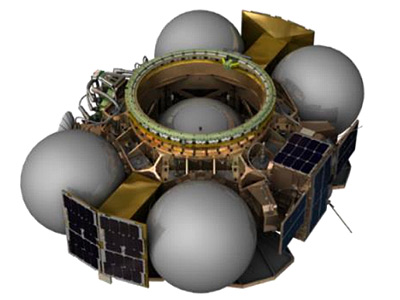 Sherpa-ES, is the highest energy variant of the Sherpa product line. Utilizing the same chemical propulsion system as Sherpa-LTC but with additional propellant onboard, Sherpa-ES is a high-thrust, high delta-V OTV. It enables rapid small satellite delivery anywhere in cislunar space, including injection to trans- and low-Lunar orbits, Medium Earth Orbit (MEO), and GEO. Furthermore, it leverages the same modular structure of the Sherpa family for increased flexibility and rapid time to flight.

The propulsion system of Sherpa-ES utilizes the same primary thrusters that are used in Sherpa-LTC, with six times more propellant capacity. The Sherpa chemical propulsion system utilizes the Polaris propulsion system from Benchmark Space Systems with green propellants. High Test Peroxide (HTP) is the oxidizer and Isopropyl Alcohol (IPA) is the fuel. These propellants are pressure-fed, using gaseous nitrogen as the pressurant. Polaris is a dual-mode bipropellant system with four independently controlled thrusters. HTP can be used as a monopropellant in a low-thrust mode or combined with IPA in high-thrust mode. Each thruster can provide up to 22 N of thrust individually; when operated together, all four thrusters provide up to 88 N of thrust. With the ability to command the thrusters independently, Sherpa can steer without the need of a gimbal. Since Sherpa-ES is designed to operate outside of LEO, there is an added Reaction Control System (RCS) to aid in control and for de-saturating reaction wheels. The RCS features clusters of 1 N monopropellant thrusters from Benchmark Space Systems.

The first mision, Sherpa-ES 1, will perform a lunar fly-by to eventually reach a geostationary orbit to deliver a payload from GeoJump, a company dedicated to providing smallsat rideshare opportunities to GEO, that will also contain an Orbit Fab in-space fueling payload.