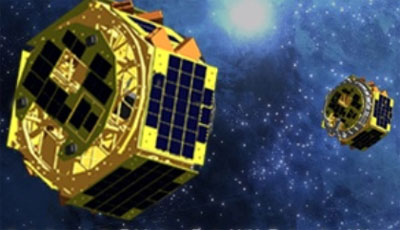 CUSat (Cornell University Satellite) project is a multi-year effort to design, build, and launch an end-to-end autonomous on orbit inspection system. The CUSat system will demonstrate a process through which one satellite can diagnose the structural health and configuration of another.

The space segment was to consist of two functionally identical satellites that would launch together and separate on orbit in a target-inspector configuration. Once in orbit, CUSat was to use microthrust Pulsed Plasma Thrusters (PPTs) and sub-centimeter level accurate Carrier-phase Differential GPS (CDGPS) to navigate the satellites to within ten meters of each other. The inspector satellite was to use cameras to gather imagery of the target satellite while performing relative navigation. Target satellite imagery was to be transferred to the ground segment where they were to be used to reconstruct a three dimensional model for the end user.

CUSat was the winner of the University Nanosat-4 Program which aims to educate the future aerospace workforce and develop new space technologies. CUSat was one of the three candidate payloads for the quick reaction "Jumpstart" launch in 2008 on a Falcon-1 launch vehicle. Which payload was to be launched was decided only two weeks before the launch, but CUSat lost.

With only one working satellite launched, the scope of the mission was changed to test the accuracy of the centimeter accuracy carrier-phase differential GPS (CDGPS) to less than 10 cm by comparing the CDGPS navigation solution to the known distance between GPS antennas. The satellite, being equipped with a camera, will also capture imagery, of the Earth, the Moon, and the comet ISON, and send these images to a ground station on Earth. The nano-satellite is also equipped with Pulsed Plasma Thrusters (PPTs). These will be tested last, once the other mission objectives have been verified.

The CUSat team conducted operations for 18 days with regular communication with the satellite before losing contact with it.