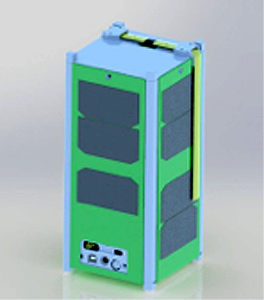 Argus is a collaborative project between SSRL and the Institute for Defense and Space Electronics (ISDE) at Vanderbilt University. Argus mission is to improve the ability to model the effects of space radiation on modern electronics. It will be done by comparing the rates of on-orbit radiation events against the predictive models developed by ISDE. Argus is a 2U CubeSat (10 × 10 × 20 cm) with a mass of 2.5 kg designed to operate in Low Earth Orbit.

Researchers at Vanderbilt University and ISDE have developed new predictive models, but it is important to calibrate them. Unfortunately, it is not sufficient to simply calibrate the models only using radiation test chambers on the ground. Modern electronics have many operating modes and are susceptible to a wide range of particles and energies; testing even one simple device across all parameters would require years of beam time! Beam time is a necessary element of calibration, but it is not sufficient. With the advent of the CubeSat standard and the universal adoption of the P-POD carrier among U.S. and international launch vehicles, spaceflight has become a cost-effective complement to ground testing.

Argus consists of the SCARAB bus and the Independence payload developed by Vanderbilt University. After separation from the launch vehicle, Argus will passively detumble, unstow its beacon antenna, and wait in safe mode until contacted by the ground. Once checked out, Argus will enter into nominal operations:

Argus is SLUs entry into the University Nanosat-7 Competition, which began in January 2011 and culminates in a Flight Competition Review in January 2013. In February 2012, Argus was selected by NASA for a sponsored launch under its Educational Launch of Nanosatellites (ELaNa-7) Program. Argus was launched in November 2015 on the inaugural flight of the Super-Strypi (SPARK) rocket out of Hawaii, but was lost in a launch failure.