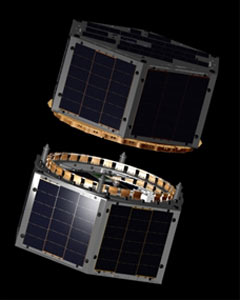 FASTRAC (Formation Autonomy Spacecraft with Thrust, Relnav, Attitude and Crosslink) is a nanosatellite pair whose design and integration has been undertaken by students at The University of Texas at Austin. The project is part of a program sponsored by the Air Force Research Laboratory (AFRL) whose goal is to lead the development of affordable space technology. The objective of the FASTRAC mission is to investigate technologies that enable space research using satellite formations. The utilization of satellite formations in space is a pivotal advancement for the future of space exploration and research.

The University of Texas is one of 12 universities in the nation selected to participate in this grant-based competition. In January 2005 won the opportunity to have their nanosatellites launched into space.

The purpose of the FASTRAC mission is to investigate enabling technologies crucial for satellite formations, including on-orbit micro-thrust capability, relative navigation, attitude determination, and satellite crosslink communications. This will be achieved by taking on-orbit data from a pair of twin satellites that will separate once in orbit. The data will be gathered through a network of civilian ground stations and evaluated through post-processing of the recombined downlink message.

The FASTRAC nanosatellite mission has three primary technical objectives. On-board the satellite, these include two primary experiments: the microdischarge plasma thruster experiment and the GPS relative navigation experiment. The third technical objective is the construction of a civilian distributed ground station network.

The micro-discharge plasma thruster was designed and built at UT-Austin. Only present on FASTRAC 1 ("Sara Lily"), this thruster channels and superheats an inert gas through a micro-channel nozzle producing a micro-Newton level of thrust. It uses a custom made composite tank from CTD. The operation of the thruster will be automated by the spacecraft's C&DH system using the attitude measurements provided by the GPS attitude determination system. After enabling the operation of the thruster from the ground, it will only be active when one of the two nozzles is within a 15 degree cone of the anti-velocity vector.

On FASTRAC 2 ("Emma"), instead of a thruster, a MASIMU01 Inertial Measurement Unit (IMU) from Micro Aerospace Solutions is used to measure the separation of the two satellites.

FASTRAC was launched in 2010 from Kodiak on a Minotaur-4 HAPS rocket. The command to separate the two FASTRAC satellites was sent on 14th March 2011, but separation did not occur. Finally on 21th March, separation occured.