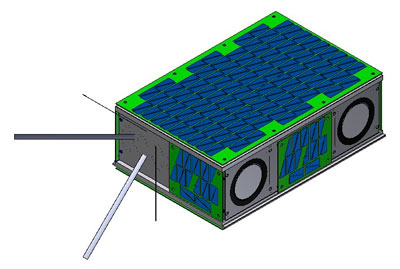 GLADOS (Glint Analyzing Data Observation Satellite) is a 6U CubeSat designed and built by the State University of New York at Buffalo, which will test out the theory that glints of sunlight reflecting off space debris could help determine its size, shape, mass and spin. For this, GLADOS is equipped with cameras and navigation equipment. The spacecraft could also help predict the path of space debris several months in advance, thus avoiding orbital collisions.

The satellite carries an imaging system, consisting of a camera and spectrometer, which rivals the performance of similar systems at a fraction of the cost by utilizing modified commercial components rather than custom hardware.

In 2013, GLADOS was selected by NASA for a sponsored launch under its Educational Launch of Nanosatellites (ELaNa) Program. Delivery of GLADOS to the Air Force is currently scheduled for mid-2017, with an anticipated launch in late 2018.