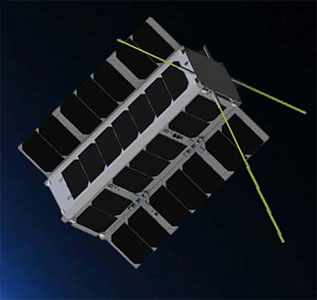 CHOMPTT (CubeSat Handling Of Multisystem Precision Time Transfer) is a 3U CubeSat mission of the University of Florida (UFL) to demonstrate nanosecond-level time transfer from Earth to a low Earth orbiting CubeSat. Precision timing is a critical for satellite navigation systems, including GPS.

Precision timing is a critical for satellite navigation systems, including GPS. Even the most stable space qualified atomic clocks drift over time to the point where they can significantly degrade navigation precision. Periodic re-synchronization of these clocks with respect to terrestrial time standards is therefore required. Time transfer through Earths atmosphere using optical frequencies offers improved accuracy due to reduced time delay uncertainties relative to radio frequencies.

An existing satellite laser ranging facility will emit short optical pulses toward the CHOMPTT spacecraft. The compact optical time-transfer instrument on board the satellite will detect the arrival time of the pulses and use a retroreflector to return the pulses back to the laser ranging facility. The resulting timing data will be used to determine both the range to the CubeSat and the discrepancy between the ground clock and the two atomic clocks on board CHOMPTT.

Launch of the CHOMPTT satellite is planned for 2016-2017. It was selected in 2014 by NASA's CubeSat Launch Initiative (CSLI) to be launched as part of the ELaNa program. It was launched on the ELaNa-19 mission.