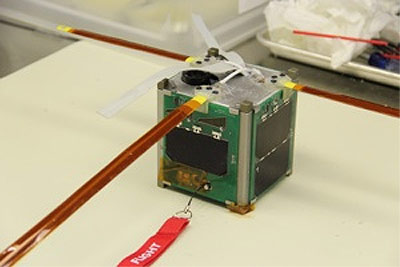 The COPPER (Close Orbiting Propellant Plume and Elemental Recognition) mission is to perform a first flight of a commercially-available, compact microbolometer array, a tiny infrared camera developed by FLIR Systems, to evaluate the suitability of using this instrument for Earth observation and space situational awareness.

COPPER is an 1U CubeSat designed to operate in Low Earth Orbit. It consists of the SCARAB bus and two plug-in payloads:

COPPER was SLUs entry into the University Nanosat-6 Competition, which ran from 2009-2011. In February 2011, COPPER was selected by NASA for a sponsored launch under its Educational Launch of Nanosatellites (ELaNa) Program. COPPER has been manifested on the ORS-3 launch, a Minotaur-1 rocket flight out of the Mid-Atlantic Regional Spaceport, Wallops Island, VA.

The launch was successful on 20 November 2013 on the ELaNa-4 mission. After deployment, no signals were received from the satellite. A reflight of the mission using a larger 3U CubeSat structure was planned for 2016 as COPPER 2 (SLU 03), but was cancelled later.