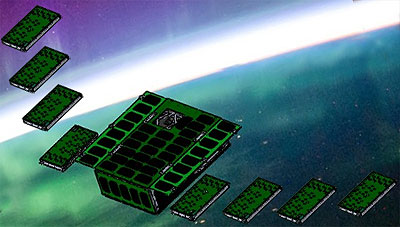 ANDESITE (Ad-Hoc Network Demonstration for Extended Satellite-Based Inquiry and Other Team Endeavors), is a 6U CubeSat mission being developed by the Boston University Center for Space Physics.

Small-scale plasma phenomena, on the order of hundreds of meter, in the aurora are difficult to resolve with conventional satellite based measurements. Boston University will launch the ANDESITE mission, that allows for a spatial and temporal resolution at this scale by flying a formation of picosatellites with on-board three-axis magnetometers. with local measurements spaced only a few hundred meters apart, they can differentiate current density distributions in auroral arcs with less constraints on the assumed geometries. These measurements then allow for a better view into the nature of current filaments and vortex structures as seen by high-resolution ground based optical cameras.

ANDESITE is a 6U CubeSat that deploys several smaller pico-satellites that each have their own self-contained scientific magnetometer, power system and radio communication system. The satellites collect data in a loosely held swarm, relaying the data back to the main spacecraft and down to the Earth through the GlobalStar sat-phone network.

ANDESITE will rely on widely accessible space-grade hardware developed around the CubeSat concept. ANDESITE seeks to use this technology to design a set of interacting miniature Sensor Nodes, for high-resolution sensing of space and atmospheric environments. A network manager called the Mule will integrate a Command and Data Handling Unit (C&DH) running Android OS to manage the constellation and data.

ANDESITE was selected in 2014 for launch with NASAs ELaNa program. The satellite was launched on 13 June 2020 on a shared Electron KS launch on The ELaNa 32 mission.