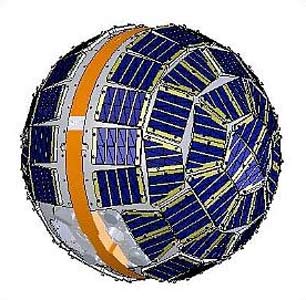 DANDE (Drag and Atmospheric Neutral Density Explorer) is a low-cost satellite which makes in-situ measurements of the neutral atmosphere at altitudes of 200 - 350 km is being developed at the University of Colorado at Boulder (CU) as a part of the Air Force sponsored University Nanosat Program. Neutral density, composition, and wind measurements are increasingly needed to further scientific understanding of the upper atmosphere.

DANDE is the first spacecraft to be specifically designed to measure winds, drag, and number densities simultaneously. These measurements will reduce the uncertainty in drag-deduced density values especially during storms when in-track winds can contribute significantly to spacecraft drag. To accomplish this, DANDE will carry a novel drag measuring system as well as a Wind and Temperature Spectrometer which will characterize the horizontal wind vector. The project is a joint venture between Colorado Space Grant Consortium and the Aerospace Engineering Sciences department wherein students design and build the hardware under the mentorship of faculty, government and industry advisors.

DANDE was selected as the fifth University Nanosat mission for a launch in 2011. It was launched as a piggy-back payload on the maiden flight of the Falcon-9 v1.1(ex) launch vehicle. The spacecraft is expected to be operational for about 1.5 years before solar radiation disables DANDE's communication abilities. According to STK analyses, DANDE will be in orbit for about 18 more years before it burns up in the atmosphere as it re-enters.