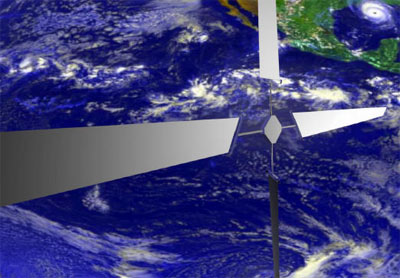 Solar Blade was a nanosatellite designed by Carnegie Mellon University, which was to fly the first solar sail, a spacecraft that utilizes solar radiation pressure as its only means of propulsion and attitude control. Solar Blade was selected under University Nanosatellite program.

The Solar Blade Heliogyro Nanosatellite has the appearance of a Dutch windmill and employs sail control akin to a helicopter. Four solar reflecting blades are attached to a central spacecraft bus and are pitched along their radial axis. The satellite uses collective and cyclic pitch of these solar blades relative to the sun's rays to control attitude and thrust. The spacecraft weighs less than 5 kilograms, and, when stowed, is a package approximately the size of a fire extinguisher.

The satellite was to demonstrate attitude precession, spin rate management, and orbital adjustments, after which it was to sail out past the orbit of the moon. In addition to attitude and orbital maneuvering, the ultra-light sailing spacecraft was to maintain a close proximity to an observation spacecraft, flying in tandem for the first stage of the mission. During this time, formation-flying techniques was to aid the observation vehicle in providing images of the operational solar sail from varying vantage points. Both spacecraft was to communicate with the Earth, uplinking commands, downlinking images, and relaying orbital and attitude information to ground stations.

The preferred launch vehicle option for Solar Blade is as a secondary payload aboard a Delta II. The schedule for the Solar Blade launch was early 2001. Station-keeping maneuver tests with the solar sail in Earth orbit span a month. Then Solar Blade was to attempt an outward spiral voyage to the Moon and was to endeavor to sail beyond lunar orbit in late 2002.

As no flightworthy satellite was delivered, the mission was cancelled.