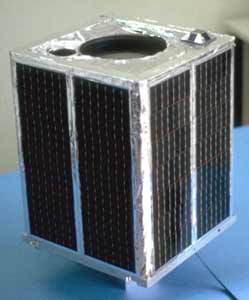 TUBSAT-B (Technische Universität Berlin Satellit B) was an experimental earth observation satellite developed and built by the Institut für Luft- und Raumfahrttechnik at the TU-Berlin.

The mission of TUBSAT-B is to test high resolution attitude control subsystems. For this reason TUBSAT-B is equiped with three first generation reaction wheels developed by TUB. Furthermore it has a star sensor on board, which is the successor of the one used in TUBSAT-A.

It was built on a box-shaped structure of 38 × 38 × 50 cm and a mass of 40 kg. The payload is a 1 m focal length telescope. As imaging device the star sensor is used in camera mode.

Contact was lost after only 39 days of operations. Nevertheless almost all experiments were done successfully.

It was launched on January, 25th 1994 on a Russian Tsiklon-3 launcher as secondary payload. The main payload was Meteor-3 6. The orbit has a height of 1250 km and a inclination of 82°.