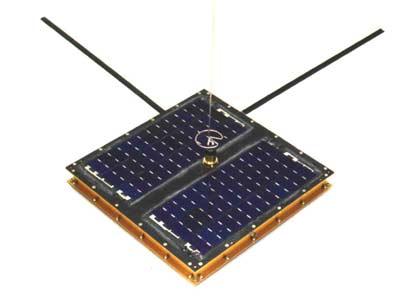 TUBSAT-N and Tubsat-N1 are two nanosatellites, which were launched on the 7th of July 1998 as a satellite cluster from a submarine with a Russian Shtil-1 rocket in the Barents Sea. All systems are working well and the satellites are in a excellent overall condition. The satellites were separated in orbit via telecommand. Both satellites were developed at the Technical University of Berlin and the complete project was financed by DLR.

TUBSAT-N1 has a mass of less than 3 kg and main dimensions of 320 × 320 × 34 mm³. The main payload are two communication transceivers for store and forward communication with a baud-rate of 1200 and 2400 baud. The transceivers work in the 70 cm frequency band and use also FFSK modulation. The attitude control of TUBSAT-N1 consistis of passiv magnetic coils. The electrical power for TUBSAT-N1 is provided by 9 NiCd-battery cells of 2.8 Ah (SANYO). The battery cells are connected serially and provide an unregulated bus voltage from 9 to 13 V. The batteries are charged by 4 strings of solar cells with the dimensions 2 × 4 cm². Each string consists of 34 cells.

Like TUBSAT-N it is used for tracking medium-sized and large mammals, stolen cars and to collect data from autonomous buoys for earth environmental observation. These buoys are located in the northern atlantic ocean and near the canary islands.

In spring 2000 the ground station observed the re-entry of TUBSAT-N1.