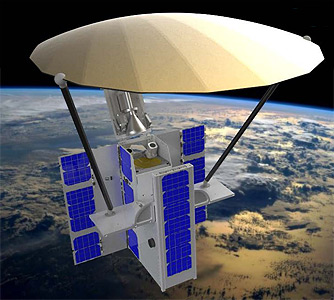 The NSLSat 1 is a 6U CubeSat pathfinder mission for NSLComm's planned high throughput Cubesat constellation.

NSLSat-1 will test a new kind of expandable and flexible spacecraft antenna to offer data rates up to 100 times more than current nanosats. Designed to accommodate the deployment of a nonrigid reflector that is bigger than any other antenna, the NSLSat-1 will deliver deliver high-capacity footprints up to 1 Gbps and elevate LEO capabilities for a wide range of applications from narrowband to end-to-end constellations facilitating robust commercial and government applications.

NSLComms reflector folds up into just 2U (two liters) of space inside a specially designed nanosat and once in orbit it pops out to an unparalleled size that translates into super high bandwidth. In addition, NSLSat-1 incorporates a flexible subreflector that optimizes and shapes the antennas footprint to ensure payload flexibility that can change on the fly while deployed in LEO orbit.

The 6U CubeSat is being built by ÅAC Clyde Space.

The satellite was originally planned to be launched as a secondary payload on an Indian PSLV rocket in November 2018, but eventually flew in July 2019 on a Soyuz-2-1b Fregat.