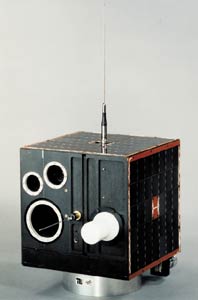 DLR-Tubsat (Deutsche Forschungsanstalt für Luft- und Raumfahrt - Technische Universität Berlin Satellit) is a joint project of the DLR and the Institute of Aeronautics and Astronautics at the Technical University of Berlin. Based on the experience gained with TUBSAT-A and TUBSAT-B an attitude control unit of minimal dimensions has been developed for the DLR-TUBSAT microsatellite.

The satellite has a mass of approximately 45 kg and a cubic shape of 32 cm length. It is mainly used for high resolution Earth observation tasks. This is done in a live TV mode with a three head camera system with different focal lengths, resulting in a resolution of 370 meter down to six meter per pixel. The pictures can be received with a standard satellite dish with a minimum of three meter diameter. The mission scenario implies, that the users transmits the coordinates of a point on the earth and the satellite computes the needed attitude control actions to track this point during the crossing.

The S-Band antenna (white cylinder on the right) has the same direction as the optics. The antenna is a helix antenna and has an opening of 70 degrees. To receive the signal of the satellite the user will have to be within a 70 degree cone around the optical axis. This means one can only make pictures of an area within aproximatly 1000 km range of your receiving ground station.