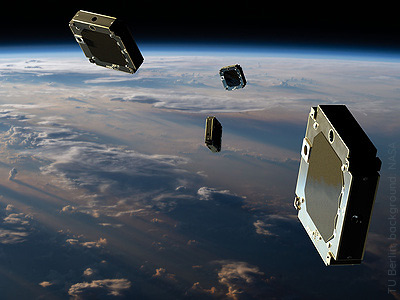 BeeSat 5 to 8 (Berlin Experimental and Educational Satellite) is a pico satellite constellation project of the Technical University of Berlin for further development and verification of miniaturized components for distributed pico- and nanosatellite systems in the framework of the PiNaSys II program.

Essential functions of a distributed system are the communication and the relative navigation among the satellites. At TU Berlin a picosatellite swarm mission is developed consisting of the four 0.25U CubeSats BEESAT-5 to BEESAT-8 with a mass of 330 grams each. The picosatellites were designed fully redundant and almost complete single-fault tolerant.

The primary mission objective is to demonstrate a newly developed communications subsystem in the UHF band and an experimental GNSS receiver. Furthermore, the satellites contain a multifunction optical attitude determination sensor and are equipped with corner cube reflectors on all sides for laser ranging from ground.

There are two indentical sets of each four satellites: BeeSat 5 to 8 and BeeSat 10 to 13.

The four satellites fit together in a 1U CubeSat form factor space. Four satellites were originally to be launched on Spaceflight Industry's SSO-A multi-satellite launch on a Falcon-9 v1.2 (Block 5) rocket, but missed the launch opportunity. BeeSat 10 to 13 were launched on an Soyuz launch in July 2019. BeeSat 5 to 8 are to follow later in 2019.