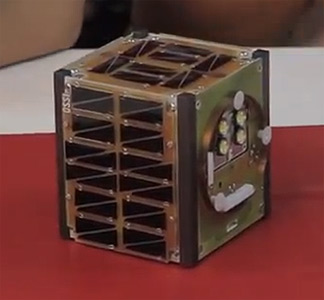 The 950 g satellite has a beacon in the 145 MHz band and a data communications transceiver in the 435 MHz band. This innovative satellite carries a 44 watt LED array to flash Morse Code messages to observers on Earth. Radio hams can reserve messages by sending signals to the satellite then observers can see the messages at the scheduled time in a flashing Morse Code LED pattern.

OSSI-1 was launched on a Soyuz-2-1a rocket from the Baikonur launch facility in Kazakhstan along with the Bion-M 1 and some other nanosatellites. The launch was successfully condcted in April 2013 with an orbit of 575 km by 290 km and 64.9° inclination.

OSSI-1 was deployed from Bion-M 1 on Apr 1, but it did not transmit and it isn't even being tracked.