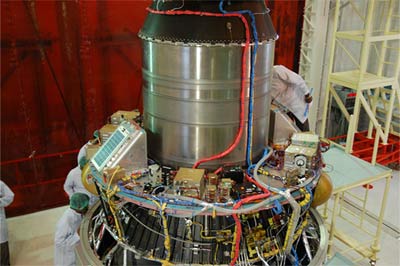 Rubin 9 consists of two payloads Rubin-9.1 and Rubin-9.2 weighing 8 kg each and will primarily be used for the Automatic Identification System (AIS) for Maritime applications. These are non-separable payloads that are mounted at an angle of 45° to the PSLV EB deck.

Rubin-9.1 (AIS-Pathfinder 2) is developed by LuxSpace, a daughter of OHB-System, and has a mission objective of providing an insight into the issue of message collisions that limit detection in areas of dense shipping.

The main purpose of the OHB-System developed Rubin-9.2 payload is to test and qualify nano technologies from Angstrom company Sweden and to continue space based maritime Automatic Identification System (AIS) receiver experiments (started with Rubin-7 and Rubin-8 missions). Rubin-9.2 is similar to the Rubin-8 launched on PSLV-C9 in April 2008.

Rubin-9 was successfully launched on 23 September 2009 on a PSLV-CA from India.