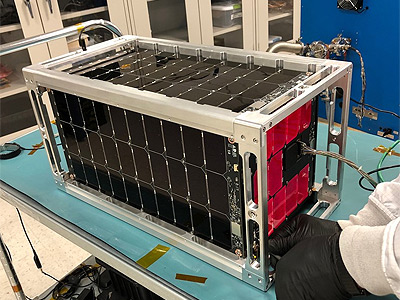 Momentus X1 or El Camino Real is a 16U CubeSat built as a demonstrator for Momentus' water based propulsion system.

The mission is a technology demonstration of Momentus' water based microwave electrothermal propulsion for their Vigoride orbit transfer vehicles and satellites. The purpose of El Camino Real will be to flight demonstrate the core propulsion technology. The company flies their high performance X-Band (10 GHz) microwave electrothermal thruster with enough water propellant to be able to run the thruster long enough to fully characterize its performance in space with dozens of stop start cycles and then safely de-orbit the vehicle.

The company was reporting success in on-orbit testing of water plasma propulsion and other key elements of its Vigoride in-space transportation vehicle. Contrary according to a SEC release, the mission had failed to achieve its primary mission objectives. Internal company documents defined success as 100 thruster firings, each lasting at least one minute, but the thruster failed to perform even one firing of that duration, and only three of 23 produced any plasma. Momentus lost contact with the satellite three months into a six-month mission.