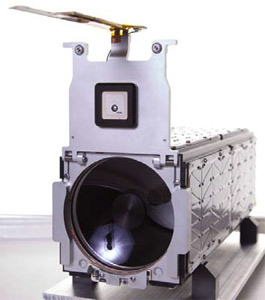 The Dove-2 mission is a technology demonstration nanosatellite for Cosmogia Inc., later renamed Planet Labs, for remote sensing purposes based on the triple CubeSat form factor.

The Dove 2 mission is also an internal company technology demonstration experiment to test the capabilities of a low-cost spacecraft constrained to the 3U cubesat form factor to host a small payload. Dove 2 is licensed to collect images of the Earth and will undertake a short-duration experimental mission in a 575 km by 575 km orbit at an inclination of 64.9°. It was launched in 2013 as a piggyback payload on a Soyuz-2-1b launch.

Dove-2 is based on the 3U cubesat form factor. Basic physical dimensions are 100 mm × 100 mm × 340 mm with a mass of approximately 6.0 kg. The Dove-2 superstructure is comprised of three 100 mm × 100 mm skeleton plates, with L rails along each 300 mm corner edge. There is one plate at each end of the structure to carry the telescope and camera mass. Additionally, there is a skeleton support structure behind the telescope to hold the required electronics. The telescope has a 90 mm aperture and a high-resolution camera, which provides a ground resolution of 4.4 m. The optical path is down the central axis of the satellite. The design includes a spring-loaded lens flap to protect the optics during launch and to mount the S-band patch antenna. Power storage is provided by Lithium-Ion cells. The batteries were recharged by solar cells mounted on the body of the satellite.