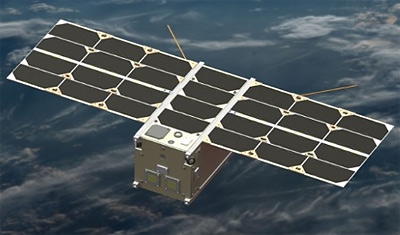 NanoFF (Nanosatellites in Formation Flight) is a CubeSat project for formation flying by the Technical University of Berlin (TUB).

Within the NanoFF project a 2U CubeSat with a propulsion system will be developed. After the successful qualification of the satellite, two flight models will be launched into a sun-synchronous orbit to perform formation flight manoeuvres. The primary mission objective is to fly a helix orbit. The satellites can be moved along their orbits in order to change the distance and to demonstrate different application scenarios. In the course of the mission, further formations are to be adopted in which one of the satellites will autonomously maintain its relative position to the other.

The 2U CubeSat will have a mass of 2.67 kg and dimensions of 100 × 100 × 227 mm3. It is divided into three parts of approximately equal size (propulsion 0.6U, bus 0.7U, payload 0.7U), of which both bus and payload are fully redundant. NanoFF uses deployable solar panels to generate the needed energy. These were developed at the TUB department and will be verified on orbit within NanoFF. Reaction wheels and magnetorquers as well as a combination of star, solar, magnetic field and angular rate sensors are used to determine the position for the high-precision attitude control required for formation flight. Communication to and from the ground is handled via UHF band.

As a payload each satellite will fly a camera system with four narrowband spectral channels, with both satellites potentially being equipped with different optical filters. This would allow a broader bandwidth of scientific data. The camera system will be radiometrically calibrated, the ground pixel resolution 39 m with a swath width of more than 160 km from a 575 km SSO. For the download of all the generated data, an X-band transmitter will be used.

The satellites will be launched in the first half of 2023 on a rideshare mission. They will be deployed from a free-fyling D-Orbit ION-SCV deployer.