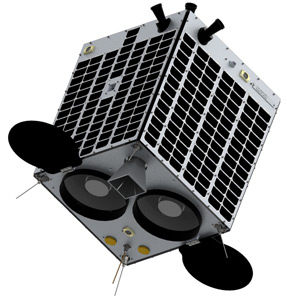 GRUS is a constellation of three 80 kg Earth observation micro-satellites developed by Axelspace. They are equipped with high-performance optical telescopes, which enable them to take images with 2.5 m ground resolution and over 50 km swath.

GRUS can obtain panchromatic images (having sensitivity in all bands from visible to near infrared and normally expressed in grayscale format) and multi-spectral images (having sensitivity only in a specific band; blue, green, red, red edge and near infrared respectively). The ground resolution is 2.5 m for panchromatic images, 5.0 m for multi-spectral images.

GRUS satellites are equipped with high-performance telescopes with cutting-edge image sensors and the swath of its image spans over 50 km to realize efficient covering of the entire globe. By launching many GRUS satellites, it enables to update every information around the globe every day, and to apply those data to various industries including agriculture, forestry, fishery, mapping, GIS and disaster monitoring.

The three first-generation GRUS satellites were to be launched in 2018, with more satellites planned to follow to form the AxelGlobe constellation. The satellites were manifested to fly with Kanopus-V 3 and 4 on a Soyuz-2-1a Fregat, but were replaced by mass models on the actual launch. GRUS 1A will now launch with Kanopus-V 5 and 6 on a Soyuz-2-1a Fregat. GRUS 1B and 1C will follow in 2020. A fourth satellite built for FSTRA, the Fukui Prefectural Satellite or GRUS 1D, is identical and will operate together with the three AXELSPACE owned satellites.