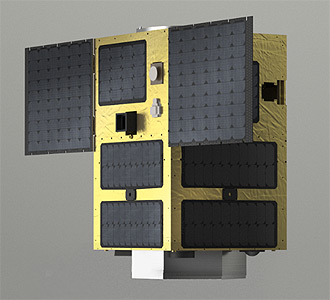 The ELSA-d (End-of-Life Service by Astroscale - demonstration) program is a spacecraft retrieval service for satellite operators. The ELSA-d is the first project and its mission is to demonstrate the core technologies to be used for the ELSA program.

ELSA-d is comprised of Chaser and Target. Chaser is equipped with optical sensing instruments and a redundant capture mechanism, and Target is with a docking plate (DP) as it functions as a rescue package. The DP is to enable Chaser to secure Target and provides optical references (or markers) for Chaser to identify and estimate the attitude of Target.

The Target and the Chaser will be attached for launch and deorbit, but while on-orbit, will be deployed in a series of three increasingly complex separation and capture manoeuvres using rendezvous and docking algorithms. A docking plate with optical markers will be attached to the Target, allowing the Chaser to identify and estimate attitude during the docking.

On 25 August 2021 the target was released for the first time and then recaptured using a magnetic mechanism.