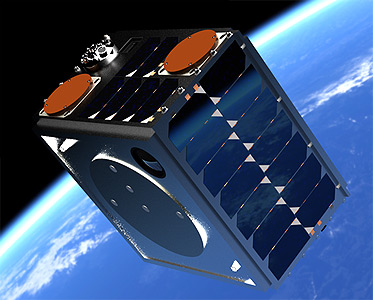 The ELSA-d (End-of-Life Service by Astroscale - demonstration) program is a spacecraft retrieval service for satellite operators. The ELSA-d is the first project and its mission is to demonstrate the core technologies to be used for the ELSA program.

ELSA-d is comprised of Chaser and Target. Chaser is equipped with optical sensing instruments and a redundant capture mechanism, and Target is with a docking plate (DP) as it functions as a rescue package. The DP is to enable Chaser to secure Target and provides optical references (or markers) for Chaser to identify and estimate the attitude of Target.

The Target and the Chaser will be attached for launch and deorbit, but while on-orbit, will be deployed in a series of three increasingly complex separation and capture manoeuvres using rendezvous and docking algorithms. A docking plate with optical markers will be attached to the Target, allowing the Chaser to identify and estimate attitude during the docking.

SSTLs Target satellite incorporates S Band communications, GPS positioning, a 3-axis control system and laser retro-reflector. A variant of the SSTL-42 constellation platform family designed for operational missions in the 5k g to 100 kg range, it will also fly an HD camera and lighting to record the capture sequences during eclipse.