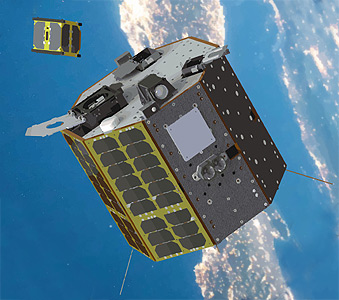 UniSat 7 is a technology satellite built at GAUSS Srl. It is intended to test customer equipment under space conditions and to deploy Cubesats and PocketQubes in orbit.

It will be employed to test and verify GAUSS original Research on Astrodynamics, RF, Optics, ADCS, AOCS and Space Debris detection. UNISAT-7 will host a Radioamateur payload and TLM will be open for anyone to be downloaded and decoded. The satellite will host Technology payloads for Earth Observation based on COTS and open-source HW.

A wide angle camera is on board to acquire imagery of the deployment sequence and a nadir facing camera to image the earth. It also features the experimental REGULUS nano propulsion system.

The satellite could feature four 3U CubeSat (one fitted) deployers and four deployers for PocketQubes (two fitted). It will deploy the BCCSAT 1 (1U) and FEES (0.3 U) CubeSats and the DIY 1 (Arduiqube) (1p), SMOG 1 (1p) , STECCO (6p) PocketQubes.

Launch was planned for the second half of 2016 on a Dnepr rocket as part of a multi-satellite mission. As the availability of Dnepr had become doubtful, the satellite was delayed to 2021 to be launched on a Soyuz-2-1a Fregat rocket.