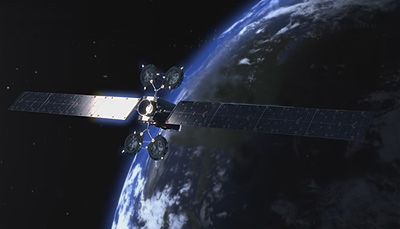 Satelites Mexicanos S.A.B. de C.V. (Satmex) announced in July 2013, that it has contracted with the construction of Satmex 9 to Boeing Satellite Systems as part of a four satellite ABS/SATMEX deal. SATMEX was acquired be Eutelsat in 2014 and was rebranded Eutelsat Americas. In May 2014, it was renamed Eutelsat 117 West B.

Eutelsat 117 West B is a satellite with 48 Ku band 36 MHz equivalent transponders, capable of serving all of Satmexs Latin American customers in the video, telecommunications and government sectors. It will also carry a Wide-Area Augmentation System ((WAAS-GEO 5). The WAAS hosted payload will enable the U.S. Federal Aviation Administration (FAA) to enhance aviation safety. Co-located with Satmex 8 at the 116.8° W orbital position, Eutelsat 117 West B is designed to provide capacity to Satmexs DTH and telecommunication customers. The satellite was constructed on the BSS-702SP bus - a version that features an all-electric propulsion system.